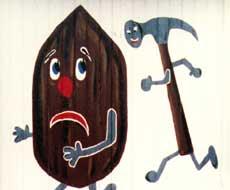 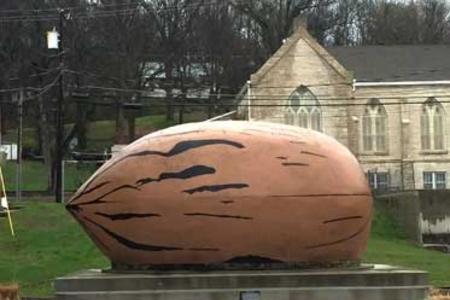 ​
The World's Largest 20th Century Pecan still rules the Brunswick landscape, moved from the
James Pecan Farm in 2013 to a more visible roost in town between City Hall and the Post Office.

George and Elizabeth James ran their pecan farm on the outskirts of Brunswick, Missouri, for nearly 60 years. In 1982 they built a concrete replica of their patented Starking Hardy Giant pecan, a tasty strain discovered by George on the property in 1947. Today, the area is thick with pecan farms -- the Brunswick Pecan Festival is held every October.

Starking Hardy Giant Pecan being chased by Wham the Hammer.

Brunswick is home to  Rear Admiral Wayne E. Meyer (April 21, 1926 – September 1, 2009) is regarded as the "Father of Aegis" for his 13 years of service as the Aegis Weapon System Manager and later the founding project manager of the Aegis Shipbuilding Project Office.   He retired from the United States Navy in 1985 as the Deputy Commander for Weapons and Combat Systems, Naval Sea Systems, Naval Sea Systems Command and Ordnance Officer of the Navy.

Darrell Knowles born in Brunswick in 1941 went on to become a professional baseball pitcher. During his Major League Baseball career, Knowles played with the Baltimore Orioles, Philadelphia Phillies, Washington Senators, Oakland Athletics, Chicago Cubs, Texas Rangers, Montreal Expos, and St. Louis Cardinals, between 1965 and 1980. The baseball an track and field facilities at the high school were named in his honor.

There is river access to the Grand River with a covered picnic area, electric hook ups, and a fish cleaning station provided by The Brunswick Lions Club.  There are also historical markers for Lewis an Clark, and The Trail Of Death Potawatomi Indian forced relocation from Indiana to Kansas.

When our visit our town you can also enjoy our beautiful court yard. Complete with fountain and tables for enjoying a piece of Kaitlyn's Cheese Cake or a bag of fresh popcorn from Allen's Dime Store.

Located above City Hall, the museum has many interesting displays of area history.  Viewing is by appointment only at this time. Contact City Hall for contact information.

Allen's Dime Store and Variety has a large selection of cards for every occasion, everything from office supplies to mixing bowls, home decor  and Russell Stovers Candy.

We also have a world class quilt shop and retreat Sew Sweet Quilt Shop. It is 6well worth a look even if your not a quilter, all the fabric is arranged by color and is a real treat for the eye.

You will also want to check out Upriver Urban Exchange  with clothing consignment and new attire for everyone in the family and more.   Upriver Home and Gifts is loaded with home decor and everything for the kitchen, gifts, and don't miss the candy counter.

Coming in 2020 The Grove Antiques.

Brunswick as several bed and breakfasts

The Nest listed on airbnb